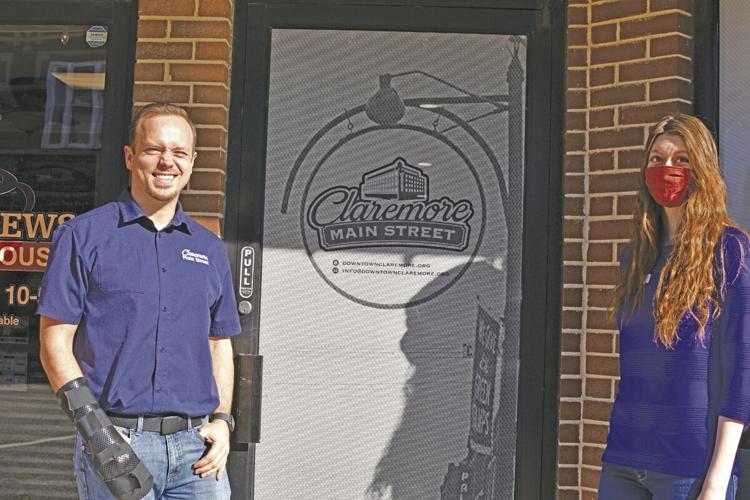 Claremore Main Street’s downtown footprint grew in an effort to match its ambitions when the organization moved into its new offices Monday.

The office, located at 412 W. Will Rogers Blvd., is 1,100 square feet. Main Street occupied office space — about 100 square feet — in the Claremore Chamber of Commerce building.

“This space is going to be great for the next few stages of growth that our organization can have,” Executive Director Jacob Garrison said.

Garrison said the most important aspect of the new building is having a visual footprint downtown.

The process of looking for a new building began in November after the board hired Shiloh Johnson as Executive Assistant.

Garrison said he knew the new office space would become available soon and by Dec. 1 they had started renovation.

The building offers a storage room in back, kitchen area, two offices, a board room and a reception area.

Garrison said they went from an empty building to a functional office in one month.

“It was very humbling to see how many people wanted to pitch in,” he said. “The time frame and cost that it would take to do this would be much larger than what we would be able to to.”

Whether it was financial contributions or time and talent, Garrison said the contributions of many is what helped make this happen in a short amount of time.

“These people are so excited to help us and it makes us excited to go forward with what we’re doing,” he said.

With the new space, Garrison said he’s able to focus on the longterm goals of the organization.

“This has and will expedite the growth of our organization,” he said.

Garrison said there is not a vacancy problem downtown because people want to get in. Looking forward, Garrison said they’re not focusing on if they can fill the buildings but what types of businesses they’d like to see downtown.

Garrison said they will be working with Claremore Collective to create think tanks and see that what the citizens of Claremore want to see within their downtown and community.