We locals have watched for months as the new Spectrum Paint flagship store got a new look, recreating the vibe of the building in its heyday. The neon sign on the corner of the building, located at 500 W. Will Rogers, was the icing on the cake. And now, the building has a cherry on top, in the form of an interactive street mural by artist Kelsey Montague.

Kelsey lives in Colorado; she attended Colorado University in Boulder, before studying abroad for two years. She studied art in Florence, and graduated from Richmond University in London with a degree in Art, Design & Media before moving to New York City.

For the past six years, she’s been creating street murals. Her sister Courtney (who also studied abroad) is the Operations Director for Kelsey Montague Art. As the girls put it, they basically live out of a suitcase. With Kelsey’s murals on six different continents, many countries, and a slew of U.S. states, that’s an easy statement to believe.

Spectrum Paint, the largest independently-owned paint dealer in the country, approached Kelsey about providing the perfect finishing touch for their new store. Kelsey worked with Spectrum’s owners, John Detter, Travis Detter, and Roddy Russo, as well as Gentry Detter Stafford, Vice President of Marketing, to come up with the design.

Kelsey is excited about what the tree represents. “It’s an organic family tree, growing and expanding just like the town is,” said Kelsey. Upon closer inspection, visitors to the mural can find hidden objects in the trunk of the tree, including a zebra, Will Rogers’ hat and rope, a paint can, and a fox, both of which have meaning to the Detter family. Sitting atop the tree is an eagle, which also has lucky connotations for the Detters.

Kelsey said, “I love to create interactive art, where people can step in and become part of the art. I always have an idea on how people will pose with it, and then they come up with so many other creative ideas! People take ownership of the art, and I love that. It really becomes something special to the community.”

This is Kelsey’s second art commission since the beginning of the pandemic, which is unusual since she’s usually in two to three cities per week. It’s also her first trip to Oklahoma, and Claremore is honored to have the first piece gracing the downtown district.

Thank you to Spectrum Paint and Kelsey Montague for making this happen! 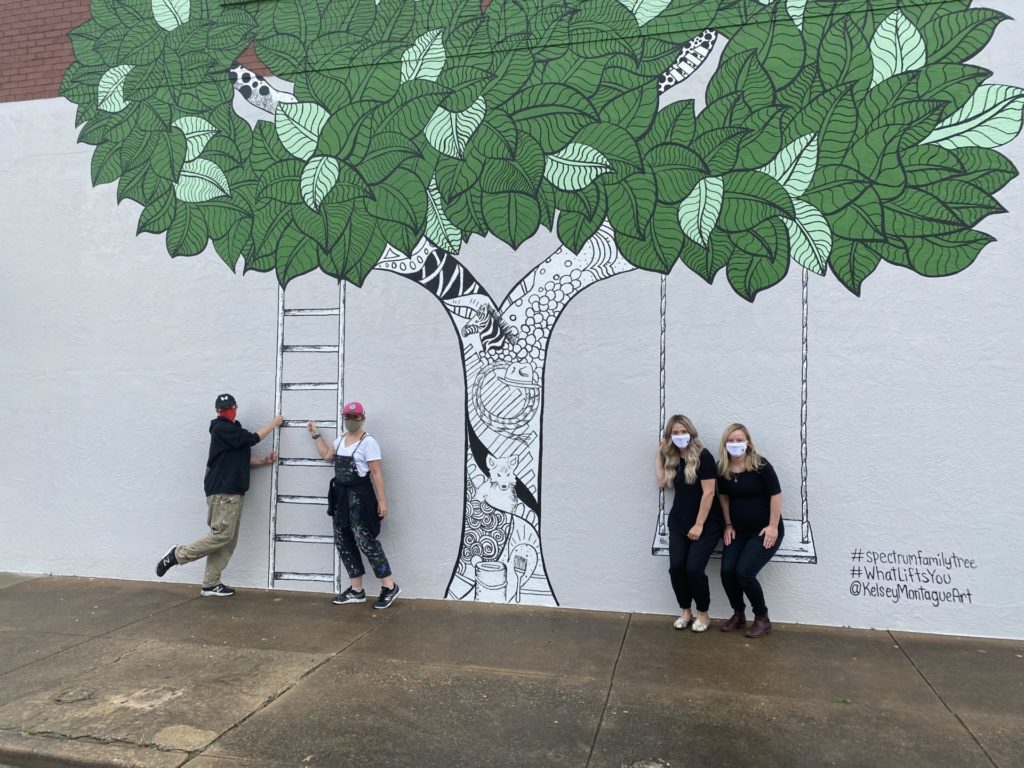