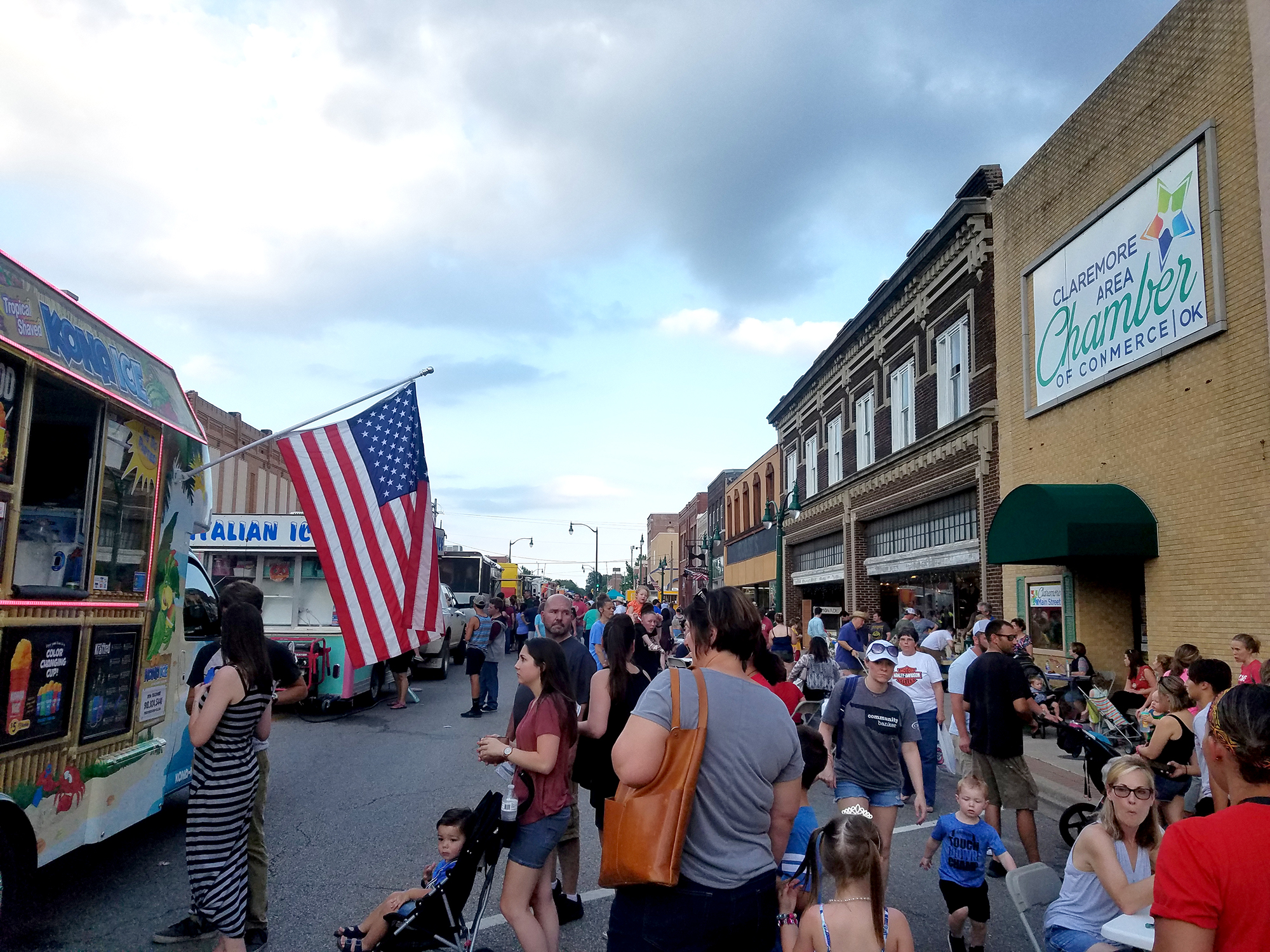 American flags are raised high. Summer days are warming and nights are short. Fireworks are just around the corner.

Downtown Claremore celebrates the United States and the military with Food Truck Thursday Yankee Doodle Downtown on June 28 from 6-9 p.m. The monthly, seasonal event features more than 20 food trucks, late night shopping downtown, a free Kids Zone by Cedar Point Church and – for this month only – a special military band with more than 40 years of tradition will be performing in Claremore.

“It’s the week of a major primary election and less than a week before we celebrate our Independence Day, so an American-themed Food Truck Thursday was a natural fit this month,” Jackson said. “We are excited to have the Air National Guard Band of the Southwest coming out with their jazz ensemble, Flight Plan.”

The band, which is nationally recognized, will perform two sets during the evening – one beginning at 6:45 p.m. and one beginning at 7:45 p.m. At 7:30 p.m., there will be a special presentation to honor veterans, active military and others.

The Marine Corps League will be set up near the band and will be giving away pins to all Vietnam War veterans. Additionally, Blue Star Mothers will be accepting donations and the American Legion will be hosting a Wreaths Across America fundraiser.

Downtown will be decorated with balloons and American flags, and downtown stores will show off their Fourth of July flare as part of the window-decorating contest. The winning store will be announced at the event.

At the free Kids Zone by Cedar Point Church, kids will have an opportunity to design cards to be sent overseas to those on active duty, create their own American flag and play yard games. Additionally, there will be free juice and Rocket Pops. Parents are asked to watch their children while they enjoy the games and fun activities.

For those who’d like to burn a few calories before partaking in food trucks, the Claremore Rec Center will be offering free aerobics classes downtown all night long in 30-minute segments. Located at the end of the 300 block near Muskogee, anyone can join instructors for as little or as much as they’d like of the yoga, kickboxing, step and line dancing.

Most shops will remain open throughout the event while other vendors will be in the streets to add to the shopping variety. The Main Street Tavern will be selling low-point beer, and Studio B Artworks will be offering face painting.

Upcoming dates for Food Truck Thursday are July 26, August 30, September 27 and October 25. Each month will feature a different theme.

Food Truck Thursday is made possible thanks to its community support and sponsors, including Season Signature Sponsor Midtown Rentals and numerous major and supporting sponsors.

Nonfood vendors who would like to set up a booth should email Jennifer Kincade at fttnonfoodvendors@yahoo.com. Space for food trucks is completely booked for the season.