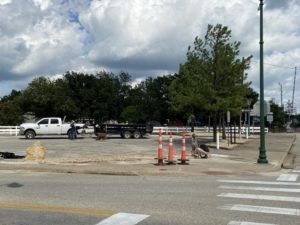 An otherwise drab and wasted space is being transformed to a Main Street focal point.

Before sunrise Friday, Main Street Executive Director Jacob Garrison, and son, could be seen with heavy machinery clearing out a forgotten corner of main street.

“This project is making something out of nothing,” Garrison said. “This is a multi-part project. We started mid-March, me and the parks department. We spent a full day clearing out brush and trees. It was insanely overgrown so we cleared all of that away.”

Friday, Garrison told the Progress: “Today we’re removing last of it, coming in with the rocks and landscaping. The initial plan would have included plants and shrubberies but since it got pushed back to the middle of summer we thought that wasn’t the best time to plant, so we will add greens and plants in the fall.”

About a week ago city crews came out to do large cut outs on the corner. Now Garrison and crew are adding dirt, rocks and other landscaping elements.

“We’ll set up and concrete a large “‘older’ that will be engraved—those details to be announced later,” he said.

A new bench will be installed between the rock and the landscaping elements.

But the piece Garrison is most excited about is an 8-foot tall by 6-foot wide downtown map kiosk.

“We’re working with Claremore Sign to erect this,” he said. “The kiosk is going to be great. It’s going to be for downtown Claremore. From the colors to the font we wanted it to feel historic, elegant and classy. We’re going to have the downtown map displayed across the front of it so anyone shopping can find names and addresses.”

He said the project may be a simple one but it adds a lot to downtown.

“This project is making something out of nothing. This corner offers parking but not much else. When I started talking about it, I’d mention it to people couldn’t even visualize where I was talking about. It was a very forgotten corner,” he said. “The bench was so grown with trees and bushes you could barely tell it was there. We took a forgettable corner and made it a great book end to main street. It will be vibrant and eye-catching.”

He said the kiosk and the corner in general will help unify things like the Farmer’s Market, Belvidere, Claremore Museum of History and downtown merchants.