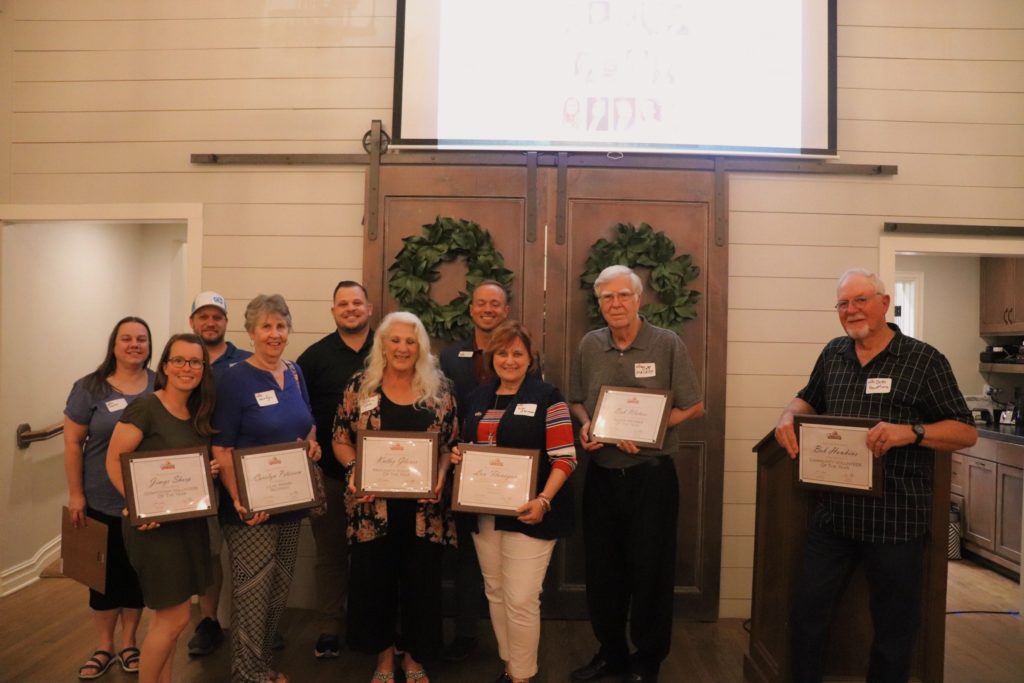 “2020 brought many challenges to this community and it brought many challenges to Claremore Main Street as well,” said Board of Directors President Kyle Clifton. “However, despite the adversity this community was faced with, Main Street continued to push forward with it’s mission to preserve, restore and revitalize downtown Claremore. As well as provide critical support to local businesses and local merchants.”

Executive Director Jacob Garrison said he would not be able to name all the volunteers who showed up and dedicated their time to help downtown.

Claremore Main Street came up with a new award: the Lilac Award. Garrison said this award goes to someone who has been a part of the journey for many years.

Carolyn Peterson was the recipient of the Lilac Award.

“There’s not a folder of photos in the Main Street computer that does not have one of her faces on it,” Garrison said.

The 2021 Board Member of the Year recipient was Bob Waters.

Here are the names of the 2020 awards and recipients:

• Volunteer of the Year — Jimye Sharp.

• Downtown Business of the Year — LoliPop a sweet boutique.

Because COVID prevented Claremore Main Street members from having a banquet in 2020, they announced the 2019-20 Board Member of the Year, Nancy Fitts, at Thursday’s banquet.

Garrison said it was humbling to look back at everything done in the past two years and everyone involved.

During Garrison’s first year — 2019— he started by looking for ways to enhance the visual aspect of downtown Claremore.

The first thing he did as executive director was change the benches and trash cans. He then added downtown banners on the light poles.

Several businesses began investing in downtown in 2020, including Taps on the Tracks, Smoke and Tonic and Wildflour Baking Co.

“I can’t think of anything I appreciate more, outside our volunteers, than people who come in and invest in our downtown,” he said. “Because if we were to just continue doing what we’re doing, and we didn’t have those people putting their dollars in, we’d just be spinning in the mud.”

They began working on the Muskogee Corner — a project Garrison said was the longest project so far during his career as the director. He said the project has received compliments statewide.

The mural on the Spectrum Paint building was completed, the downtown map was donated, Claremore Main Street was rebranded with a new logo, the windows on Ann’s Cleaners were remodeled and events such as Food Truck Thursdays started.

“It’s been a fast ride of momentum that we want to keep going,” he said.

That momentum has continued within the first half of 2021.

Claremore Main Street moved into its new offices and has organized at least one event every month.

Claremore Main Street is working on creating a Parklet Program.

“We wanted that to increase some of the sitting areas in our downtown,” he said.

Garrison said a parklet encompasses a parking space and creates a seating area. The goal with the program is to get more people engaged downtown.

“Our success can not be measured from one perspective, or part of the main street process,” Clifton said. “It takes the sum of all the parts working together to achieve the vision.”